Health providers in Indonesia have an obligation to realize the improvement of health status through the national health system. The effort that must be done by the hospital in realizing these goal is the improvement of other services that is preventive and promotive. Therefore, Indonesia has implemented the health improvement by establishing a committee of Public Health Extension Workers which was changed in 2003 into Hospital Health Promotion. Health promotion is conducted in hospitals in order to develop the understanding of patients, families and visitors of the hospital with health problems and prevention efforts. Fatimah Islamic Hospital has implemented health promotion in hospitals in improving the quality of complete health services. This study aims to determine the implementation of health promotion that has been done by RSI Fatimah in Banyuwangi. The method used is interview and observation. Interviews were conducted to the PKRS team using an interview guide. While the observations made using instruments made based on references related theory of health promotion standards in hospitals. Based on the research results, health promotion conducted at RSI Fatimah as a whole has fulfilled the requirements of laws. Starting from the policy until the implementation is well arranged and directed. The division of PKRS officers consists of various fields that facilitate dissemination of health promotion information. In almost every service there is visual information such as leaflets, posters and information boards. Fatimah hospital is also active in providing counseling to patients, patient families and other health workers in an effort to increase knowledge on certain health problems, as well as spiritual guidance to inpatients. The fulfillment of health promotion needs in general has been well implemented, but at the point of providing information to the surrounding community isn’t intense and hasn’t formed a specific health group for community empowerment. 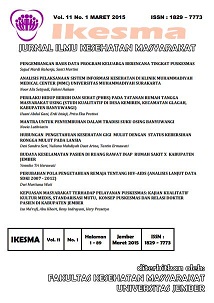 IKESMA Published by Fakultas Kesehatan Masyarakat Universitas Jember
is licensed under a Attribution 3.0 Unported (CC BY 3.0).