Screening to genomic library of soybean cv. Lumut by using gene encoding for peroxidase (per) from A. thaliana as a probe has an objective isolate the whole gene of per from soybean. The probe was labeled by non-radioisotope alkalin phosphatase. Screening was done by two steps. The first, screening was done to 105 recombinant lambda phages containing genome of soybean cv. Lumut. After southern hybridization, positive signal of plaques were isolated and screened for the second time. After second screening, some recombinant lambda phages containing putatively per genes were isolated. Excision from recombinant lambda phages into recombinant plasmid was successfully done in Escherichia coli strain BM25.8. The plasmid DNAs were isolated from E. coli strain BM25.8 and introduced into E. coli strain DH5α for multiplication. Plasmid DNAs were digested by EcoRI and transferred onto nylon membrane hybond N+. Southern hybridization analysis showed that one clone, L10/R/3/4, contain per gene in the 7.7 kb EcoRI fragment. This fragment is inserted into pSportI. 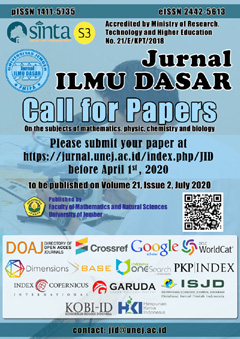