Depression is an unfavorable condition for the elderly. When depression is untreated,elderly can isolate themselves. In addition, elderly can end his life. Spiritual emotional freedom technique (SEFT) can be used as complementary therapy for elderly with depression. The purpose of this study was to determine the effect of SEFT among elderly with depression at Jombang geriatric service unit in Pare Kediri. A quasi experimental was conducted in this study with intervention (n = 15) and control group (n = 15). The results revealed the mean of pretest in both groups showed mild depression. The pretests score was 7.07 for control and 7.20 for intervention group. In the posttest, intervention group show reduction of mild depression became no depression (87%), whereas the
mean of the control group remained in mild depression (score = 6.93). The results of paired t-test in intervention group showed that the p-value <0.05 in conclusion, there is a significant difference between the pretest and posttest score in intervention. Based on the findings, the SEFT could reduce depression among elderly. In addition SEFT can be used as complementary therapy in nursing for elderly with depression. 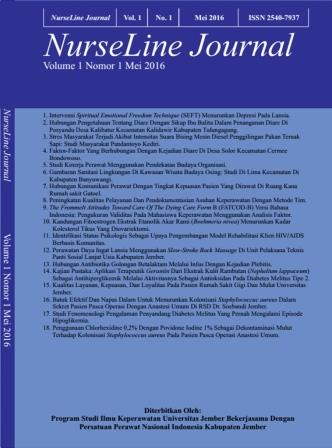 Obs.: This plugin requires at least one statistics/report plugin to be enabled. If your statistics plugins provide more than one metric then please also select a main metric on the admin's site settings page and/or on the journal manager's settings pages.
ONLINE SUBMISSIONS
JOURNAL DETAILS
SUPLEMENTARY FILES
JOURNAL TEMPLATE