Aluminum is known has neurotoxin effect that can lead to alzheimer's disease, dementia, and parkinson's. Metal ions such as aluminum can distract homeostasis and increase oxidative stress level, formation of reactive oxygen species (ROS) that can overwhelm antioxidant defenses and cause DNA damage, lipid peroxidase, leading to the destruction of testicular cells. Tamarindus indica’s seeds are one of the traditional plant and useful as antioxidants. Tamarindus indica’s seeds are able to protect testicular cells from damage caused by ROS. The purpose of this study to determine the effect of methanol extract from Tamarindus indica’s seeds to prevent aluminum chloride induced testicular damage to be measured from the histopathological features. This study is a quasi experimental design with a posttest design only with non-equivalent groups using thirty male Wistar rats divided into five groups, one control group and four treatment groups. The control group was given 1 mL of aquabides solution orally. Group P1 was given a dose of aluminum solution 300 mg/kgBW orally. Groups P2, P3, and P4 were each given an aluminum solution at dose of 300 mg/kgBW orally and an extract solution at a dose of 25, 50, 100 mg/kgBW orally for 10 weeks. The results of the observations showed that the scores varied between groups. Data analysis using Kruskal-Wallis test obtained p value = 0.006 (p <0.05). Post Hoc test using Mann Whitney obtained varied p values. Post Hoc analysis between K and P1 groups, P1 and P3 groups, P1 and P4 groups showed a significant difference with p value <0.05. Based on the results of this study, methanol extract from tamarind seeds (Tamarindus indica) that was given to male wistar rats had prevented histopathological damage to the testes of rats induced by aluminum chloride (AlCl3). 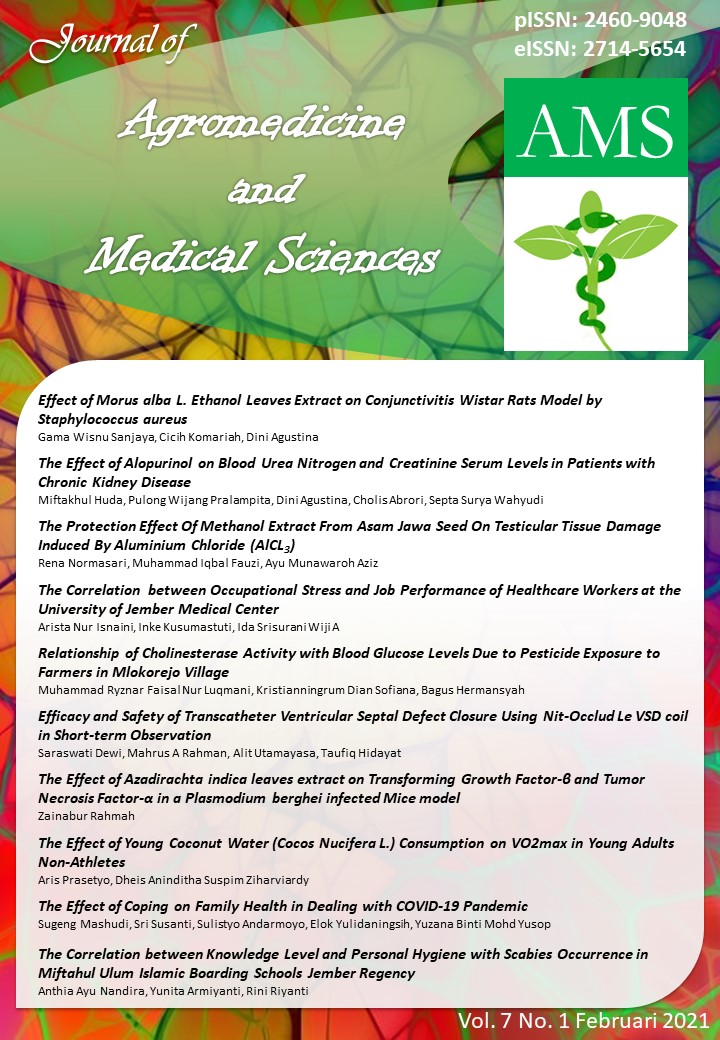